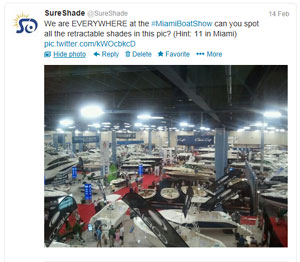 How to use hash tags on Twitter to share real-time updates, photos and videos at boat shows to create buzz with exhibitors, attendees and the marine industry

Twitter has become a popular tool for communicating and promoting businesses and products during trade shows and events across many industries. Using unique event “hash tags”, large consumer and industry events typically have a robust following on Twitter before, during and after the actual event.

The marine industry, on the other hand, seems to be somewhat lagging behind on the trend of live tweeting at events. Even at major international boat shows like Fort Lauderdale and Miami – amidst numerous new boat model and product debuts – there are very few boating businesses and professionals tweeting from the event.

Whether the problem is a hesitation to embrace Twitter as a marketing tool in the marine industry, a lack of Twitter marketing know-how, or a combination of the two… live tweeting at boat shows is a practice that boating businesses large and small should learn how to do.

While I don’t necessarily claim to be a Twitter expert, I have noted how the social media “pros” use Twitter at events to their advantage. We have used many of these techniques with SureShade already and have seen the benefit (even with the lackluster tweeting activity happening by others at boat shows to date).

The Twitter “tricks of the trade” are actually easy to pick up on if you watch – and follow – carefully.

Connect with show handles. From show management (management company running the event) to important show exhibitors and media, make sure you are well connected on Twitter with the people or businesses that matter. This is something that you should be doing on Twitter anyway, but do a little research ahead of the show to double check that key show participants are on your Twitter Follow list.

Identify the Twitter hash tag. Live Tweets at events will typically include a “hash tag” that connects everyone with the event. Every tweet you send at a show or event should include this hash tag.

Getting the right hash tag is important, and typically easy to identify. Show management will usually establish the hash tag as an acronym of the event name… like #FLIBS (for Ft. Lauderdale)… or sometimes it is an abbreviation of the show name… like #MIAMIBOATSHOW. It’s important not to assume the hash tag. For example, last year there was some confusion with the Miami International Boat Show – I saw one major boat manufacturer using #MIBS in all their tweets when the show had established it as #MIAMIBOATSHOW. Make sure you use the right one to maximize its purpose.

Good show management will ensure that the hash tag is out there and known well ahead of the show. You can also check with the previous year’s show to see what the expected hash will be at the event.

Pre-show buzz. Start tweeting about an event before it starts – as early as 4-6 weeks for major international boat show events. This will help create some pre-show buzz and alert your Twitter followers that you will be active on Twitter at the event. Getting active on Twitter early at a show will also help you get your tweets or photos tweeted “trending” (or popular) on Twitter for the show hash tag.

Get more visibility. Photos with tweets are a great way to share updates at events. The boating industry is such a visual business, and sharing photos of new boat models or new innovative boat features through Twitter is very easy to do.

Start a conversation or join a conversation. As with any social media, try to engage people with interactions that are not just one sided. Re-tweet other tweets at the show (they’ll likely look to re-tweet for you too). Reply to live tweets at the show. Let them know where your exhibit is located or invite them to special events you may be holding at the show. And most importantly, when replying or mentioning another company in your tweets, make sure you use their twitter handle (@TWITTERNAME) to get their attention.

As the marine industry starts to get more savvy on Twitter at boat shows and events (yes, it will happen eventually…), make sure your business is in the game and taking advantage of this free and easy-to-use social media marketing and communications tool.