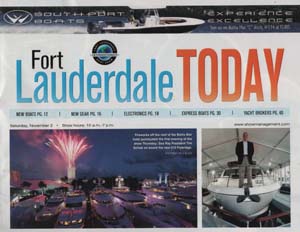 If you attended the 2013 Fort Lauderdale International Boat Show then you no doubt saw the daily show publications distributed throughout the show featuring near real-time content and photos from the show.  And if you have any experience in publishing, you know that the execution of  the daily magazine was no easy feat. In fact it was very likely taken for granted by many attendees and exhibitors at the show.

The Soundings Trade Only team of editors and photographers put together two 56 page full-color print publications that featured fully edited features, interviews, press event photos along with “live” pages of content created and written at the show. The publications featured appealing to both the marine industry and boat buyers at FLIBS.

With many years experience in the print world, I was actually quite fascinated with how they were able to pull off the daily publication. People leisurely walked past tables at the dock and in the convention center and simply grabbed a copy not even thinking about the sweat (and I am guessing some tears and blood too) that went into the production. But I was impressed. And exhausted for them just thinking about the long hours that went into such an accomplishment.

In this real-time information sharing world that we live in, creating a daily at a major boat show is almost expected. People want instant news and they delivered. What is so impressive about about the publications is the fact that it was so timely AND so well put together. In fact, that combination of quality and speed can be one of the most challenging things about doing marketing well in the marine industry (or any industry for that matter).

Bill Sisson, editor-in-chief at AIM Marine Group (publishers of Soundings and Trade Only magazines), gives some great insight into the process in his recent blog post Closing the loop on unfinished business at FLIBS where he tells the tale of the 2012 Fort Lauderdale Today drama due to Hurricane Sandy. Apparently production of the 2012 dailies involved loss of electricity, Wi-Fi access problems and even a late night bicycle accident by executive editor Chris Landry. Luckily the 2013 production went much smoother for the team.

Bill shares some of the daily production details in his blog post too. The real-time publishing process involved pulling together a mix of “live” pages that they report, write, edit and lay out at the show along with other features and interviews done in advance. But first the team must spend time attending a lot of boat manufacturer press events, along with a lot of walking the docks and convention center for content.

The onsite editorial team – Bill Sisson, Chris Landry, Rich Armstrong, Steve Jylkka and Jim Flannery – worked out of a hotel room at the Bahia Mar to pull together the content for each issue. They were supported by their editorial staff back at the home office and used a local printer in Florida to print each publication overnight.

In the end, the Soundings Trade Only team produced 16 stories and four videos for their e-newsletter over four days at the show, in addition to two daily publications that included 17 live stories and about 30 photos from the event.

Marine marketers (and marine industry professionals) should really praise and appreciate the extra effort that goes into publishers covering major events like the Fort Lauderdale Boat Show. The logistics of real-time publishing is no easy feat.

As we reflect back on our individual marketing and communications efforts at the show – maybe struggling a bit to keep up with real-time social media updates via Instagram, Twitter or Facebook –  we should not overlook the silent machine of real-time publishing that was underway and cruising along at FLIBS.